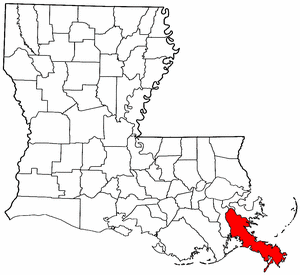 We all have our Proust moments: the singular bite of something that we loved and cherished in our childhood, re-tasted later as an adult, transporting us back in time to a particularly fond memory. Truman Capote, in his semi-autobiographical short story “A Christmas Memory”, describes in great detail the food of his childhood in the Deep South during the Great Depression: fried squirrel, biscuits and ham, flapjacks, Christmas fruitcakes. Capote could not hardly write a paragraph without offering a food memory from his past and neither can I.

Just as with Proust and Capote, my childhood memories are also centered on the foods of my youth, and even today, small tastes of certain foods evoke large memories of my life lived on a narrow sliver of land called Plaquemines Parish. I grew up in the small town of Port Sulphur, located 45 miles southeast of New Orleans, Louisiana. Originally founded as a sulphur mining town, it became the crown jewel of the “fisherman’s paradise” and home to groves of citrus fruit. Unfortunately, Port Sulphur is now known for something else: the exact spot of landfall of Hurricane Katrina on August 29, 2005. And, on that fateful day, I lost my hometown.

My mother’s parents emigrated from Scotland in the early 1920’s when my grandfather was hired by the Freeport Sulphur Company. Unfortunately they both died before my mother finished high school so I never had the opportunity to experience “boiled mince”, which is the first dish she cooked for my father as a newlywed. It did not go over well. So, she learned her Louisiana-style dishes from my father’s mother, known affectionately by all as “Mama the Cook”. 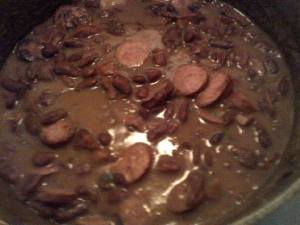 Great cooks abound in my family.  I grew up on several different variations of gumbo, my mom’s versus my Aunt Helen’s and later, my brother Tommy’s.  My dad’s stewed chicken melts in your mouth and my brother John Roy fries a mean turkey. We each make our own version of the Louisiana staple, red beans and rice with smoked sausage (mine is pretty good). My cousin Kim’s crawfish maque choux won a local cooking competition. And then there’s the best jambalaya in the world, made by my Uncle Guy’s brother, Joe.

Uncle Guy, whose first language was Cajun French, married my dad’s sister and went into the grocery business with my grandmother.  He cooked every day in the back of his grocery store. When shopping in the store with my mom, I made a beeline dash to the back of the store to see Uncle Guy. He was my godfather, and I was his “Michelangelo”, his nickname for me. He always offered me a taste of what he was cooking. I would ask “what is it?” and he would invariably respond “chicken”. I lapped it up, only discovering much, much later in life that I had been eating goat, snapping turtle, wild duck, goose, alligator, and more. These foods all seem exotic and distant now, but were perfectly ordinary and normal at the time.

I have many fond memories of Friday nights, when we would all meet at my Aunt Helen’s for dinner.  Being Catholic during pre-Vatican II times, we abstained from meat on Fridays all year-long.  Luckily, given the abundance and quality of seafood from the Gulf of Mexico, this was not a problem. My Uncle Guy and my dad would go out to the “pit”, a separate building next door to their house that had a great indoor barbeque and a small kitchen, to fry whatever fish he had caught that day at “the cut”, the local fishing hole, usually catfish or redfish, sometimes flounder.  He would also boil shrimp and crabs (as opposed to steaming as is done in the Chesapeake Bay region where I now live), and when the season was right, we had boiled crawfish.  My Aunt Helen had a huge pot of seafood gumbo simmering on the stove in the kitchen, and next to it would be a big pot of white rice.  My mom made potato salad and for my cousin Keith “macaroni salad”, a cold pasta salad of small elbow macaroni, mayonnaise, celery, and pickles, and oddly enough, eaten on saltine crackers.  There would be snacks out, too, normal things like potato chips and French onion dip, but also another Louisiana specialty, shrimp mold, which is a cold shrimp salad made with condensed tomato soup, unflavored gelatin, chopped celery and other seasonings, poured into a ring mold, and then after it has set, eaten as a spread on Ritz crackers.

There were always multiple desserts, the domain of my cousin Penny.  Some of her specialties were red velvet cake, carrot cake, bread pudding with bourbon sauce, and usually some crazy cold concoction like “banana split surprise” or some other instant pudding/whipped topping/multiple layered gooey thing.  We often made ice cream: banana, peach, or strawberry, in an old hand-crank machine filled with crushed ice and rock salt, later upgraded to an electric one. My dad’s younger sister, Hilda (affectionately known as Susie), also a stellar cook, would come in from out-of-town laden with goodies such as her specialty, pecan pie. And, if my Aunt Lillian was there, we would have her famous peanut butter fudge, a recipe we all thought went with her to her grave until I found a handwritten copy in an unmarked box of miscellaneous papers after moving 4,000 miles to Waterloo, Belgium.

There were lots of family members but also present were neighbors and outsiders too, people who had been in my Uncle Guy’s grocery store at closing time, or his fishing buddies like my mother’s cousin Duffy or someone I remember calling Uncle David (pronounced the French way to rhyme with “speed”).  We would all sit around the den and eat in stages, eat whatever was ready next and then move on to the next item, never sitting down to a table set with silverware and such.  The boiled seafood was eaten either in the pit or in the garage, on big tables spread with newspaper.  When the steaming pots were dumped on the tables, out would tumble perfectly cooked shrimp, crabs, or crawfish, seasoned to perfection with Zatarain’s Crab Boil, and the “side dishes”, corn on the cob, whole heads of garlic, and new potatoes, all cooked together, truly a one-pot meal.

Extra fridges in the garage or in the “sewing room” held sodas and beers, and everyone just helped themselves.  Of course, most women did not drink beer then, so my Uncle Guy was called upon to make his famous “Old Fashioned” cocktails for Aunt Helen and any of the other ladies who wanted one.  After dinner, there would be homemade orange wine, made from the citrus grown on Uncle Guy’s land, “Songy’s Evergreen”, and cherry bounce, a deadly potent liqueur made by fermenting fresh cherries with bourbon and sugar for several months, usually served over vanilla ice cream or pound cake. Aunt Helen had a large glass jug that sat in a wooden stand which would be rotated daily during the fermenting process. If the top wasn’t removed periodically to release the pressure created by the fermentation process, you were likely to find the walls covered in sweet, sticky, dripping cherry bits, sort of like stumbling upon a homicide scene right out of CSI New Orleans!

After the men were finished cooking in the pit, they would play “pedro”, a card game distinctive for the manner in which the cards were played, by thumping them down hard on the table. I can almost still hear the sound of Uncle Guy’s knuckles hitting the table when he played his card, a cigarette dangling from his mouth and a beer in a frosted mug at his elbow, complete with his customary pinch of salt added to the foam.  The men didn’t seem to eat much, other than pieces of fried fish as it came out of the cast iron skillet in the pit while it was cooking.

When the card game was over, and almost everyone was loosened up from the beers and Old Fashioneds, the coffee table was pushed aside, the lights in the den were dimmed, and records were played on the stereo for the grown ups to dance.  Frank Sinatra, Dean Martin, Roger Miller, Johnny Cash, all were regulars at the Friday night parties.  While this was going on, my mom would give me the “signal” and I would reluctantly go to the kitchen and put the food away, unloading and loading the dishwasher, washing the huge gumbo pot, wiping down the countertops. 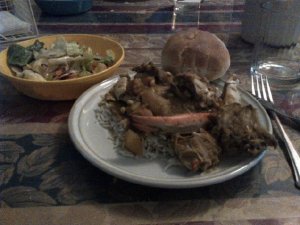 Life first separated me from my hometown after college, and then more permanently when I moved to Maryland in 1988 for work and for love. But I returned home once a year, husband and babies in tow, for Christmas or Easter or during the summer, to visit family and get a refill of good food and the slow, laid-back lifestyle found only in Louisiana. During those years I made sure to learn the recipes for dishes that instantly transported me back home: the smell of a roux slowly cooking to the color of a copper penny, the smooth creaminess contrasted against the crunch of the celery in shrimp mold, the sweetness of crabmet juxtaposed against the cayenne pepper in crab stew, the irresistible velvety uniqueness of Aunt Lillian’s peanut butter fudge. Unfortunately, I never mastered Uncle Guy’s Old Fashioneds or Aunt Helen’s Cherry Bounce, but my daughters are both well versed in roux-making and beignet-frying, as well as how to determine if fudge has reached the critical soft-ball stage.

I’ve only returned to my hometown twice since Katrina, once in 2006 to see for myself the massive destruction, and then again, for my Aunt Helen’s funeral in 2012. It’s difficult to go back, and there is no one there to go back to. Except for St. Patrick’s Catholic Church, where I received my sacraments and was married, which miraculously survived Katrina’s violent flooding and high winds, there is no physical sign of my past in Port Sulphur:  my parents’ home, every school I attended, the homes of my childhood friends, my extensive collection of original Barbie dolls and their miniature exotic wardrobes, my yearbooks and mementos from high school, all gone.
As time marches on, and those I love age and leave me, all I have left of my hometown are my cherished Blanchard family recipes and memories like those Friday nights, sweet and poignant now, but taken for granted and viewed as an obligation by a sometimes sullen teenager. Home now means the place where my husband and daughters are . . . but deep down, home will always be that narrow sliver of land sandwiched between the mighty Mississippi and the bayous of southeast Louisiana.

2 thoughts on “A Narrow Sliver of Land”