I didn’t go looking for drama; it came to me. In early 1984, I was at a very low and dark point in my personal and professional life. I went to work, came home, went to bed, got up, and repeated that process for weeks-no, months-on end. My only foray out of my apartment was to Mass on Sunday. I was not sleeping well, not eating well, and generally, not doing well. And then one Saturday in April of that year a friend came to visit. I was horrified to have an unexpected guest drop in on me and see the way I was existing. In fact, my half-decorated Christmas tree was still up (barely standing) in my living room, a carpet of pine needles surrounding it.

My friend took stock of the situation and sent me upstairs to shower and get dressed. “We are going out,” she said firmly. There was no negotiation allowed. I dragged myself upstairs and did as I had been instructed. When I came back down, my living room was spotless, dead Christmas tree dragged to the dumpster, decorations stacked neatly on my dining room table. That was when she made the announcement: “I’m on my way to audition for a part in the musical South Pacific and you are coming with me. After the auditions we are going out to lunch.”

Uh, no. No thanks. No way. Not happening. But, as friends come, this one is a real spitfire. At this juncture, we had been friends for ten years, after meeting in 1974 as freshmen during sorority rush at Southeastern Louisiana University in Hammond, Louisiana. 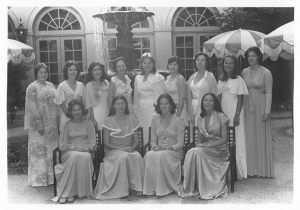 Here’s my Phi Mu sisters (including my friend) and me (standing, first on left) at our sorority’s National Convention in 1976, Charleston, South Carolina.

She was involved in theatre back then, too. She was an actress, with a great voice, and lots of what I later learned was called stage presence. She had won the lead in the school’s musical as a freshman. Yes, she was good.

After a bit of hemming and hawing, I realized resistance was futile and I followed her to her car. She drove us to the campus of our alma mater and parked at the music building. We went in and she signed the clipboard for those auditioning. We then took our seats in the theatre. I have to admit that once there, it was fun sitting in the dark, cool theatre, watching the people go up on stage under the bright lights and sing a song for their audition. Sometimes, the director or the music director would speak to them or ask them to do something additional. A few were asked to dance a bit or read lines. I had never seen anything like it and I was intrigued.

Eventually my friend was called up. She did a great job (or so I thought, but what did I know, never having been in a play before). Then the most shocking thing happened. The woman with the clipboard called my name over the microphone. WHAT? I didn’t sign up for anything! I just sat there stunned. My name was called again. My friend literally raised me up by my elbow and said, “She’s here!” I blubbered something about just being there to watch but I soon found myself being “escorted” by my friend up the stairs to the stage, the music director shouting at me, “What piece are you singing?” My friend then said, “Oh, she didn’t prepare anything, she’s just going to sing ‘Happy Birthday’.”

I cowered next to the baby grand piano parked stage right, waiting for further instruction. The accompanist started playing and I just stood there, mute. The music director shouted, “Are you going to sing or what?” So, I sang “Happy Birthday”, badly and I am sure pretty off-key.

You can imagine my shock and surprise a few days later when I saw my name on the cast list, under the ensemble group, Frenchwomen’s Chorus. I was even more shocked to see my friend’s name in the same ensemble group. She was so good, how could we be given the same part? By this time, I had been “convinced” that this would be good for me: I would have a place to go in the evenings, meet new people, try something different, and have the opportunity to act and sing and dance. So, I was thrilled to see my name there, even though it was a very small part, singing just one song, “Bali Ha’i”, and later in another scene, singing its reprise. My friend was not so thrilled at being cast as ensemble but we vowed to hang in there together, me the novice, she the veteran.

Along with music and/or stage rehearsals every weeknight, there were costume fittings, shopping trips to purchase stage make-up and character shoes, props to find, sets to build and paint, and of course, the requisite nightcap at a local bar after rehearsals on Friday night. My friend was right. I made a lot of new friends and had fun while doing it. 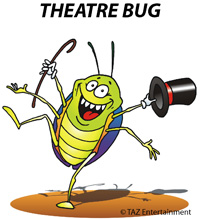 And, as they say, come opening night, when those bright lights hit me in the face and I basked in the applause during the curtain call, I had been bitten by the theatre bug.

For the next five years, I was a fixture with that theatre group. I joined the group officially, ran for office, headed up committees, volunteered for anything and everything under the sun, and auditioned for each and every play that came up, even when there wasn’t a part that was really right for me. 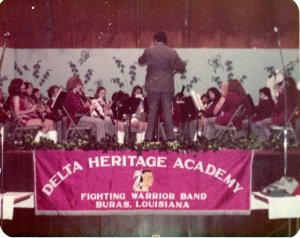 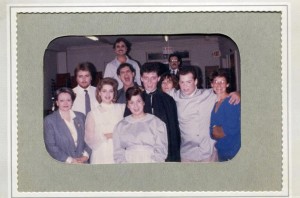 Cast of the Columbia Theatre Players’ 1986 production of Dracula. First row, far left in grey suit, me as Professor Van Helsing, a male role recast as female just for me!

I parlayed my four years of high school band and two years of childhood piano lessons into being able to read music well enough to get a part in the chorus of the summer musical each year. I gave it everything I had but in return I received much more. While I never got a major singing role, I did get the female lead in two straight plays and had the opportunity to direct two plays during my time with that group. My five years of performing in front of audiences taught me self-discipline and problem-solving as well as improving my self-confidence and public speaking skills. Serving as producer for several of the large joint productions also gave me great experience at organizing a major event involving significant sums of money. Being the editor of the group’s quarterly newsletter gave me a creative outlet for burgeoning writing skills, as well as experience in marketing and public relations for a non-profit group. 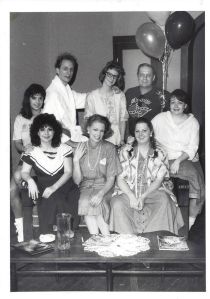 My cast for the second play I directed for CTP, Beth Henley’s play The Miss Firecracker Contest, 1987. That is me seated on the right, second row.

In 1988, after over twenty productions with the group, I had to say goodbye to my friends at Columbia Theatre Players. My “day job” as a paralegal had also brought me success, and eventually, a cross-country move for a job with a Fortune 500 commercial real estate development company. Soon after, I married and had children, and my long evenings in a dark theatre came to an end, paving the way for watching our daughters in school plays and encouraging their creative talents.

After twenty years in the legal field, I decided to become a teacher. Hoping to find a teaching position where I could marry my love of theatre with my love of literature, I attended a Catholic schools job fair, with a large silver brooch of the Greek comedy and tragedy masks on my suit jacket. 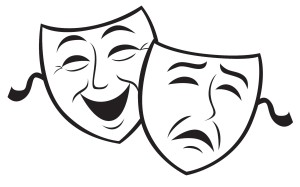 I stopped at all the booths of schools showing an opening for a language arts teacher. At one booth, a woman said to me, “Is that the symbol for theatre?” After I told her yes, she said, “Stay right here. I’ll be right back.” She returned shortly with her principal and they told me that the teacher who had directed their school plays had recently retired. “Would you be interested in doing that if you were offered a teaching position?” 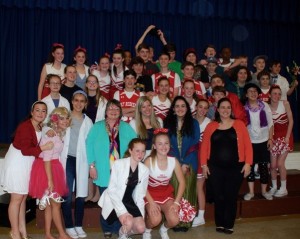 Cast and crew of my latest production, Disney’s High School Musical Junior, April 2015. That’s me in the teal jacket.

And, so, for the last eight years, that is how I have fed and nurtured the theatre bug that bit me so many years ago. It makes for a very long day, teaching all day and then holding auditions, running rehearsals, building sets, searching for costumes and props, coaxing shy students to project and sing out. After rehearsals are over, there are still lesson plans to make, essays to grade, tests and quizzes to create, parent emails to respond to. It leaves little time for leisure with family and friends, and energy for my own creative endeavors is short-changed. 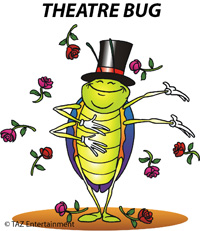 But, how can I give it up when I have been given so much in return? It seems that the bite of the theatre bug is indeed fatal.

2 thoughts on “The Fatal Bite”