Every morning, I instin 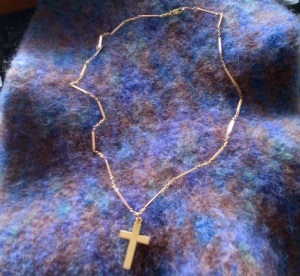 ctively reach up to feel for the rose gold chain and cross around my neck. I never take it off. It is more than just a sign of my faith; those gold links are a connection to my mother’s family in Scotland.

In 1997 my mother’s first cousin, Anna Liddell, came from Glasgow, Scotland, for one of her visits. She had been traveling from Scotland to Louisiana periodically since 1993, to visit my mother and help care for her after her many surgeries. This time, however, my parents had flown to Maryland in advance of her arrival and they were all going to stay with me for two weeks.

We had a marvelous time, knitting, cooking, shopping, and sharing family stories. Anna was in her late 60’s but spry and fun, full of mischief and energy. I adored her. She had never married, although she had fallen in love when she was young, but sadly, he was protestant, and her Catholic parents would not accept that. Not a trace of bitterness or regret lingered, however, she had made the decision to turn down his proposal of marriage of her own free will, knowing the differences in faith would come between them and their families. Being the only daughter, she remained at home, caring for her parents until their death. After her mother’s death, and her retirement, she began to travel and enjoy her freedom. She and my mother were very close, and my father was very fond of her as well.

One afternoon in my kitchen, she taught me her family’s simple recipe for scones, a staple of the Scottish afternoon tea tray. She complimented me on having a “light hand” with the dough, not kneading it too much or too roughly which would make the scones tough. While they were baking, she reached up around her neck and took off her chain and put it in my hands. She told me her father had given it to her when she was a little girl and she had been wearing it ever since. She insisted I take it, intent on connecting us to one another, across the miles and across the ocean. I’ve worn it ever since.

In May of 2000, my mother in fairly good health, my parents and I traveled to Scotland to visit her. I had traveled overseas as a high school senior, but this was my parents first time outside of the country. It was, as the famous credit card commercial boasted, “priceless”. Anna drove us around Glasgow, pointing out all of the landmarks and sights, but more importantly, the places where my grandparents grew up. We visited St. Agnes Catholic Church, Lambhill, to see where my grandmother made her First Holy Communion. We saw the house where she grew up and the neighborhood where my grandfather lived before he left for America and his job with Freeport Sulphur Company. It saddened me to think that my grandparents never saw their families again after immigrating to America.

We drove through the Highlands, looking over the fields of bluebells and heather, the thistle dancing in the spring breeze. One evening we had a lovely dinner on the shores of Loch Lomond, which Anna told us terrified my grandmother as a young girl. Another day we drove to Edinburgh and toured Edinburgh Castle. While in Edinburgh, we also toured the Royal Yacht Britannia, which had been retired from service by the Royal Family. Anna also took me to the Scottish Opera to see Richard Strauss’s Salome, which was fantastic. We squeezed a lot into that week, spending time in the homes of the families of Anna’s brothers. My parents stayed on for an additional week but I had to return home to my husband, two small children, and work. My mother passed away ten years later, and I am so glad she had that trip to be able to visualize where her parents came from and I was so fortunate to share that experience with her. We all felt very lucky to see Scotland for our first time through Anna’s eyes.

Anna’s cross and chain around my neck is much more than jewelry or a symbol of my faith. It is my link to my Scottish heritage. Someday I hope to pass it down to a granddaughter, putting it in her hands and telling her about Anna, sharing with her our Catholic faith and our Scottish heritage.

Mix together flour and butter by hand with fork or pastry blender until it resembles a coarse meal. Sprinkle in a pinch of salt, mix well. Add sugar and the raisins or currants. Stir in a little milk at a time until dough forms a ball. Turn dough out onto floured board. Knead lightly about ten times until smooth. Pat or roll out about ½ inch thick. Cut into rounds or triangles and place on an ungreased cookie sheet. Bake immediately at 450 degrees in a pre-heated oven for about 10 minutes. Serve with butter or clotted cream and jam or preserves. Yield: about 10 scones

To make these into savory scones, leave out the sugar and raisins (or currants) and add instead ¼ tsp dry mustard powder and ¼ cup grated cheddar cheese. These can be split and served with butter and ham for a light lunch.

2 thoughts on “Links to Faith and Family”