On Thursday, May 14, 2015, I said my final goodbye to my dad or at least my final goodbye in this life. Being a faithful Catholic, however, I truly believe that I will see him again in eternal life, so perhaps Thursday’s goodbye was merely à bientôt.

His funeral was beautiful. My brothers and I tried our best to include all the different branches of our extended families. An Irish priest, a longtime friend of the family, in his still thick Irish accent, celebrated the Mass, with another priest concelebrating. My older daughter was the cantor for the parts of the Mass and hymns, and my husband sang the responsorial psalm. My younger daughter, originally scheduled to read the first reading, served as lector reading both readings as my dad’s niece’s laryngitis kept her from doing the second reading. My nephews brought up the gifts, along with my mom’s niece and my parents’ godchild, my dad’s nephew. Pall bearers included my nephews and four men who were all very dear friends of my dad’s. Nearly a hundred people came to the church for the two-hour visitation prior to the funeral, and while there were many tears, there were also many light moments, reminiscing about my father’s legendary storytelling and practical jokes.

At the visitation, a family friend said to me, “Losing a parent is tough, but losing the last parent is something else, something greater.” He was so right. At my mother’s funeral, also beautiful with many family members and close family friends participating, I remember holding on to my dad’s arm. He cried throughout most of the Mass, and after that, he cried every time he went to Mass. He had been devoted to my mother throughout their nearly 53 years of marriage, but particularly so during the last fourteen years of her life, when he cared for her around the clock during many surgeries and medical treatments for heart and kidney disease. We all worried so about him and how he would cope with my mother’s death. The belief that they are together again is of some comfort, but losing him is the final ache in a series of pain that began with Hurricane Katrina’s landfall in Plaquemines Parish, Louisiana, on August 29, 2005.

As readers of my essays will remember, I lost my hometown to Hurricane Katrina, and along with my hometown, my parents lost their home and almost all of their possessions. My mother wasn’t feeling well preceding the mandatory evacuation order and did not pack to the same degree as she had for previous hurricanes. She later told me that she was lying on the sofa directing my father, tense and nervous about the storm, as to what to pack. Later, when unpacking her suitcase in a La Quinta motel room in Houston, she discovered she had mismatched pairs of shoes, pants with no matching tops, and an odd assortment of other items.

When news eventually arrived that the house was gone, and by gone, I mean totally gone-its remains were located weeks later on the back levee, broken in pieces-my mother was devastated and really never recovered from that. I recently learned from my mother’s sister, my beloved Nanny Pat, whose gift to my mother of a kidney in 1995 gifted all of us with twelve additional years with her, that my mother had said she really did not want to live through another anniversary of the disaster of Hurricane Katrina. She died on August 23, 2007, just days before Katrina’s second anniversary. We all pretty much agree that she just gave up fighting as she had done for so long.

Everything changed after my mother passed away. In October of 2007, just a month and a half later, I realized I would never get another birthday card in the mail from her. My mother (as well as my Nanny Pat, who continues to this day in this family specialty) was a master of correspondence. She wrote to me almost daily during my four years of college, and sent many, many care packages. The contents were usually somewhat odd and I learned to open the care packages in the safety of my dorm room rather than in the student union where I picked up my mail. Once, the small box, heavily armored in scotch tape, contained about a hundred sticks of 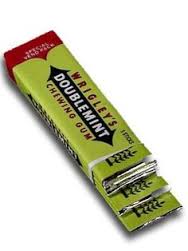 Doublemint gum (still individually wrapped, but loose, not in packages) and some personal sanitary products.

My mom sent out scores of greeting cards all year round. Hallmark was her favorite store, and no matter how poorly she was feeling, my dad’s offer of a trip to the Hallmark Gold Crown store was sure to perk up her spirits. Naturally, all birthdays, anniversaries, and major holidays warranted a card, but so did the minor ones as well: Fourth of July, Halloween; if Hallmark had a card for it, a card was purchased. When family members married, their new spouses were added to the address book, along with their birthdays and special dates. My husband often remarked that he found it so touching, how my mom and my Nanny Pat never ever let his birthday or Father’s Day pass without Hallmark making an appearance in our mailbox.

My dad wasn’t much on correspondence although he would sign his name to any card my mom put in front of him. He was, however, very attached to his cell phone. While he never graduated to a smart phone, he and his flip phone were best friends. He was famous for calling people closest to him several times a day. While my mom’s cousin Anna was still alive in Glasgow, Scotland, he called her frequently. Once he pronounced his initial greeting, he immediately passed the phone to someone else. I will dearly miss talking to him and hearing his familiar “Whatcha doing?” which was always followed by a litany of what he had eaten that day, and sometimes, what he ate the day before. He loved to tell me exactly how he had cooked something. How many times did he tell me how he made his famous smothered chicken? “First, I rinse off the chicken pieces and dry them. Then, I lay them out on aluminum foil and season them with salt and pepper. Next, I brown them on all sides in a big pan with some olive oil. I set them aside and brown thinly sliced onions and bell peppers. When they are nice and soft, I put the chicken back in, add a little water, cover them with foil, and put the pan in the oven for about an hour. It’s so good it will make you slap your momma.”  This was always served with hot white rice and good French bread.

Food has always been an important part of the fabric of our family life. None of us were ever breakfast people, and lunch was usually leftovers or a sandwich (in my father’s case, a “half a sandwich”) but extensive discussions ensued each day about what would be cooked for supper. Most of the meals served at the supper tables of homes in southeast Louisiana need to be started early in the day and simmered for a long period of time. Red beans and rice with smoked sausage or ham needs to cook for hours. My dad’s smothered chicken also involves considerable prep and long, slow cooking. Gumbo is not a dish to throw together after work on a weekday night.

My parents also loved to eat out. My dad would first order his glass of red wine and settle in to study the menu, cover to cover, all the while asking what everyone at the table was going to order. He was always a gracious diner. I don’t think I ever saw him send anything back to the kitchen or complain about a dish served to him. He was not exactly a picky eater, but he was not very adventurous until he quit smoking in 1995. He claimed that his tastes changed after he quit smoking, that food tasted “more alive” and then he really branched out trying all sorts of things that shocked us, like Chinese take-out and delivery pizza. He loved to outsmart anyone at the table who was intent on paying the bill, often handing the waiter his credit card when he placed his order to ensure he would get the bill. The best you could do was to offer to pay the tip, and that was not always something you would win at either.

I feel so fortunate to have spent nine days with my dad in April, helping to get him out of the rehab facility he had been in and get him back home with my brother. My brothers and I worked together to make important health decisions for him. During that time, in spite of the stress and difficult decisions, my dad and I had such a good visit, shared some good meals, and had some nice chats. I was able to tell him thanks for being such a great father, for teaching me so much, for giving me a strong work ethic. None of that made it any easier when the news did come on Friday, May 8th, that he was gone. It is and will be for a long time incredibly hard. À bientôt, mon père, à bientôt.