Michelle Ann Monica Blanchard Ardillo. That’s my full name. In a previous essay I noted my dad’s first suggestion for the name of his first born baby girl was Flossy, after the hurricane in late September of the year I was born. While only a Category 1 hurricane, Flossy caused major beach erosion and flooding in southeast Louisiana, including the overtopping of the eastern seawall of New Orleans, submerging a 2.5 square mile area. His second choice was Candy Denise, which thankfully my mother also vetoed. (It suits my red mica Mazda 5 much better.) She then offered her own suggestion, which my father acceded to easily: Michelle, a French name to go with Blanchard, and Ann, after her sister who was to be my godmother. She also declared that since Michelle Blanchard was long enough, it would be Ann without the “e”.

The name “Monica” is my Confirmation name. In the Catholic faith, adolescents receive the Sacrament of Confirmation where they accept responsibility for their faith, much as in the bar mitzvah or bat mitzvah ceremony for Jewish adolescents. Part of the faith formation for Confirmation is to study the lives of the saints and to select a saint to emulate, and you are given that name at Confirmation. Since I teach 8th grade, and that is the year the students at my Catholic school receive the Sacrament of Confirmation, I hear a lot of discussions about which saint each student is choosing and why. I am always fascinated by this, perhaps because we have so little say in something that is a significant part of our identity.

My own Confirmation name is that of a significant saint in the Catholic Church, not just for her own worthiness, but also that of her son. Monica was born in 331 in North Africa in what is now Algeria. Upon reaching marriage age, her parents married her off to a pagan who had a violent temper. She endured his outbursts with patience. They had three children who survived infancy, the eldest being Augustine, who followed his father in his pagan ways. Monica prayed day and night for her son’s conversion, weeping many tears over him, and he not only became a Christian, he became a Doctor of the Church, the great St. Augustine of Hippo. The beautiful beachfront city, Santa Monica, is said to be named after her, with the nearby springs resembling the tears she wept for her wayward son Augustine. She is the patron saint of married women, motherhood, and widows.

Clearly, when studying my faith and preparing for the Sacrament of Confirmation, I read about Saint Monica in my copy of Lives of the Saints edited by Rev. Hugo Hoever. WRONG. My first choice for a saint’s name was Veronica. When I presented my choice to my mother she said quite firmly, “No.” She went on to explain to me that she knew exactly why I wanted to choose Saint Veronica as my Confirmation name, because of the Archie comic books strewn about my room. She then told me to choose again and to make my choice carefully because it was the saint I wished to emulate. I was absolutely shocked that she made this connection (mostly because it was true) and went off to my room to pout.

So what is a nine-year old to do when presented with a “no” to Plan A? Naturally, Plan B was to find a saint whose name most closely resembled my first choice, and thus, after studying the table of contents of my Lives of the Saints, I came up with Saint Monica. My mother raised an eyebrow when I presented her with my second choice but allowed it.

It wasn’t for years and years that I realized what a fine choice I had made in selecting Monica for my Confirmation name. I wished my whole life to become a mother, and while I made a somewhat late entry into this hallowed club, having my first child just three months before my 34th birthday, and my second child just three months from my 36th birthday, those two days are the highlights of my life. Nothing will ever compare to those first precious moments after their births, with my husband standing at my side, holding those precious little bundles.

Choosing names for my daughters felt like an awesome responsibility. My husband and I had very little discussion about my older daughter’s first name, Margaret, as I had always said I would name my first daughter after my mother. When I was a little girl, my mom said I would line up my dolls on the sofa and tell her to come and meet my “babies”. I would then introduce them to her, “This is my baby Margaret. This is my baby Margaret. This is my baby Margaret.” Still, when I called to tell her the results of the sonogram at twenty weeks with my first pregnancy, and announced to her it was a girl, and that I would name her Margaret, she was surprised. 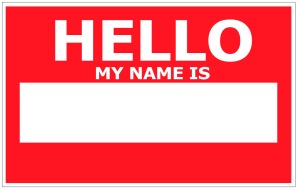 The discussions for her middle name went on for quite a bit. I was steadfast in my desire to give her something from each of our mothers, and since Margaret was my mother’s name, her middle name had to come from his mother. I had decided that her middle name should be Bellavia, my mother-in-law’s maiden name. I loved the name, it sounded beautiful to me, figuratively and literally, as it means beautiful way in Italian. My husband was not a fan of the maiden name as a middle name plan, but his father told him that since I was giving birth, I should have the final say. It was a done deal, and I know my mother-in-law was very happy.

Our second pregnancy was so very different in every way from the first I was convinced it was a boy, so convinced that we chose a boy’s name early on, Andrew Roy. Andrew was a nod to my mother’s Scottish heritage, and Roy was a “twofer”. My father’s name was Roy and my husband’s grandfather’s name (and brother’s name as well) was Roy. The fact that baby #2 kicked and moved about day and night, we were sure we had made a sound choice. The twenty-week sonogram was a shock, and at first, neither of us believed the technician that it was indeed a baby girl. When she was born, I still couldn’t believe the doctor’s announcement, “It’s a girl!” Just before the birth, I had been going through some old papers and found a genealogy report from my father’s family tree. 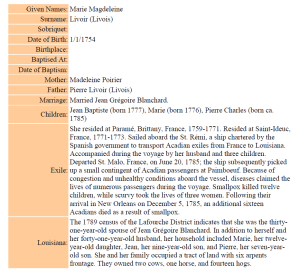 My ancestors who emigrated from France were Jean and Madeleine Livoir Blanchard. We both liked Madeline and proceeded to come up with a middle name. When I suggested my grandmother’s maiden name, Breaux, my husband put his foot down. Not another maiden name as middle name he said; it would also mean that both daughters and I would share the same initials, MBA, which he thought was a bit too much. I acquiesced this time and we continued going through names. I finally suggested Grace, which was what I had engraved inside his wedding ring, meant at the time as just a silly little private joke about being clumsy sometimes. Again, afterthought elevates that engraving to the special grace we have been given as a married couple, celebrating our 26th wedding anniversary last summer. 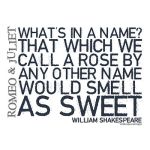 So, what’s in a name? Shakespeare built an entire tragedy around names, the very mention of Capulet to a Montegut or vice versa was that of a battle cry. A theme in Rick Riordan’s Lightning Thief is that names have power.

I’ve always loved my name, and I’ve always been thankful that my mother’s good taste and logical thought process prevailed in name selection discussions with my father. I have a special affinity for St. Michael the Archangel, given Michelle is the feminine version of that name, and St. Michael’s feast day is September 29th, not too far from my mid-October birthday.

My godfather, my beloved Uncle Guy, always called me Michelangelo, and I adored hearing him say it. Even hearing “Michelle Ann” shouted when I was in trouble for something brought me a certain joy at hearing my whole name. While I was unsuccessful in being part of Archie’s gang with my Confirmation name, I am blessed with a strong role model and saint to emulate in that of Saint Monica.

I can’t imagine my daughters with any other names, and their joint childhood nickname of the “M&M Girls” was always met with smiles by all who knew and loved them as they were growing up. Just today we were having a discussion at lunch about our signatures, and our younger daughter bemoaned how difficult signing her name is because of the middle initial G, a tricky letter to connect to others in cursive. My older daughter and I, sharing the same MBA initials, have had minor tussles over usernames in various apps and programs. In that regard, my husband was right to hold firm on a different middle initial, albeit a tricky one, for daughter #2.