As my regular readers may know, I have always been a cat person although currently I am the catless owner of an eight-year-old Maltipoo named Puccini. In fact, my very first essay published on Cajun Girl in a Kilt was “License to Carry”, a tongue-in-cheek essay about Puccini’s reluctance to go up and down the stairs of our two-story home. He is mostly cured of that but still sporadically will climb to the fourth step from the top and wait there, whining, hoping someone will come and carry him the rest of the way up. Even though Puccini has been a major part of our lives for six years now, and in many ways has improved our quality of life, I still miss having a cat and often toy with the idea of getting another one.

There are several cats in my neighborhood, but the leading male character of Briarwood Terrace is Charlie, a beautiful long-haired tabby tom cat who prowls up and down the street, in and out of yards, on and off of porches, and back and forth from underneath our parked cars. He is very clever and has escaped direct contact with automobiles although he occasionally can be spotted with minor wounds indicating he has been involved in some sort of scrape, obviously with someone or something that doesn’t know he is the “mayor” of our street. When I am out walking Puccini and I see Charlie basking in the sun in his own driveway, I always stop to pet him. Puccini is now used to this minor detour and the two of them no longer hiss and growl at one another.

My reoccurring desire to have another cat in my life, particularly strong right now, makes me think of one of Ernest Hemingway’s short stories, “Cat in the Rain”. This very short story is indicative of Hemingway’s writing style, lean and tough prose, with only enough dialogue and details to give the reader the bare minimum required to follow the story line, or at least the surface level of the story line. It’s up to the reader to dive deeper into the subtext to discover what lies beneath. Hemingway himself coined a term for this structure, the iceberg theory. 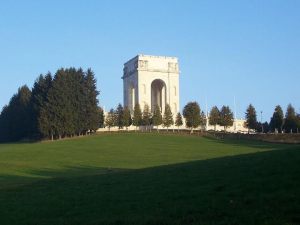 “Cat in the Rain” is the story of an American couple traveling in Italy. As usual, Hemingway doesn’t tell us where in Italy, but we know it is on the coast since the hotel faces the sea, and we know there is a war memorial in the center of town that is a tourist attraction, even for Italians themselves. We also don’t initially know the names of the Americans, they are only referred to as the husband and the wife. In the courtyard of the hotel there is a cat, crouched under a table in the rain trying to stay dry. The wife is looking out of the hotel room window at the cat while the husband lies on the bed reading.

Hemingway devotes valuable space in the exposition of the story to make sure the reader understands the emptiness of the setting. They are the only two Americans in the hotel. They don’t know anyone and don’t make any effort to meet the other guests. Because of the rain, there are no artists out with their easels and sketchpads. The parking lot is empty. The town square is empty. The courtyard is empty—except for the cat and a waiter, standing in the doorway of a café looking out at the empty square.

The wife goes out to get the cat out of the rain. She encounters the hotel-keeper, the padrone, and here Hemingway allows us a bit deeper, in the way he tells us what the American woman thinks of the padrone, what she likes about him, what she feels about him. The padrone makes her feel important, and when he sees that she is going to go out in the rain into the courtyard, he sends a maid after her with an umbrella. The American woman knows the padrone has sent the maid, to shield her from the rain, to take care of her, unlike her husband who remains upstairs on the bed reading.

When she is unable to find the cat, she returns upstairs, empty-handed. Her husband, whom we now know is called George, makes small talk with her about the cat and about her hair, after she says she wants to let it grow out, so that she doesn’t look like a boy anymore. She continues to carry on about her hair and the cat, and how she wants to have a cat to hold and pet. She branches out in her whining and talks about wanting new clothes and wanting to have dinner at a table with real silverware and candles. Eventually her husband grows weary of her whining and tells her, “Oh, shut up and get something to read”. She pauses but does not stop…she starts up again with how much she wants a cat, and if she can’t have the things she really wants, then she wants a cat.

I can’t identify with the American woman who has an empty life and an unhappy marriage, who longs for a baby. I am happily married with a full and rich life, and I have two wonderful daughters whom I loved and cherished as babies and whom I now love and cherish as young adults. But, the elephant in my room is that they are no longer my babies, they are young women who are living their own lives, seeking their own happiness, walking their own paths, creating their own dreams. In a blink of an eye, we went from sippy cups, play dates, and bedtime stories to college graduations, tax returns, and different zip codes. In spite of my confidence that they are well-grounded, bright, intelligent, loving individuals who will go out into the world and be successful, it is still heart-wrenching at times to want to turn back the clock and draw them closer, hold them a bit longer, as they go farther away from us, into their own space and time.

In today’s society, there is much talk of the empty nest, and much of it is positive, the middle-aged couple with fewer responsibilities and perhaps a bit more disposable income, combined with the free time, energy, and flexibility that did not exist with young children at home. In “Cat in the Rain”, however, Hemingway described the empty courtyard, the empty parking lot, the empty town square, all to establish a foundation for the woman’s yearning for a baby, for a loving marriage, for a full nest, not an empty one. It was not about a cat.

5 thoughts on “The Elephant in the Room”