A new school year has begun, and week two is in the books, or grade books as it were. However, my school year began a day late, due to a back injury that sidelined me for the first day of school. Calling in sick has never been easy for me; I was even more devastated to miss the excitement of the first day back, and particularly this year. In early June, I accepted a teaching position at a new school and spent all summer working on new curriculum and moving into a new classroom. I was ready for the first day at least a month ago, but God sure does have a sense of humor. You think you are ready, LOL, I’ll show you.

My “1st” day of school this year, back pain and all!

This is my eleventh year as a teacher. Starting at a new school this year, however, really meant coming home for me, as I am teaching in my home parish school, where both my daughters were educated and where my husband and I have been parishioners for over twenty years. While I was excited and thrilled with the opportunity to make this change, leaving my former school after ten years meant leaving colleagues who have become dear friends and saying goodbye to a truly wonderful school community filled with supportive and generous families.

Starting over, being the new person, adapting to new policies, and making new friends can be difficult, and sometimes, we hold ourselves back from new opportunities because of being too comfortable, and perhaps because we are afraid of change. But, change can be good. Change is an opportunity to push that reset button, to abandon bad habits, to refresh and renew one’s enthusiasm for work.

Over the summer, as I worked my way through three new literature textbooks and a bag full of new YA novels, I learned of the untimely passing of one of the greatest educators I’ve had the pleasure of knowing. Johanna Bambridge was my younger daughter’s fifth grade teacher. Within minutes of meeting her in the late summer of 2002, I knew I had encountered someone very special. Her warm smile and obvious enthusiasm for teaching was so reassuring as we began a school year in a foreign country. She knew that, even though we were moving to Belgium from Maryland, my husband and I were both Louisiana natives. She had already chosen a mentor family for us, also from Louisiana, with a daughter the same age as our 5th grader.

Early in that school year, my daughter came home and told me she had volunteered me for something at school, and that I needed to call Mrs. Bambridge, which I did. Mrs. Bambridge told me that she had asked if anyone’s mother could come in to do a cooking demonstration on the foods of ancient cuisines, and that my daughter had assured her I was the perfect person for this.

Now, let me tell you that I knew almost nothing about foods of ancient civilizations, but I do love to cook, so I sat down at my computer and began to research the foods of ancient Rome, Greece, and Egypt. And, so began my adventure in the classroom. My first cooking demonstration was karkadé (iced hibiscus tea) and kosheri (lentils and rice) with sausages. For dessert, I served the 5th graders seed cake sweetened with honey and dates. It was a smashing success. As I was cleaning up, Mrs. Bambridge said to me with her usual 1,000-watt smile, “You should be a teacher!” At first, I was startled at this (what, me?), but I admit I was also intrigued, and for the rest of our time in Belgium, I volunteered extensively at the school, including substitute teaching in the middle school and working in the high school library. Five years later, after completing grad courses and the Praxis, armed with state certification in English for grades 7-12 and with Johanna Bambridge’s endorsement ringing in my ears, I began my second career as a middle school language arts teacher.

I not only knew Johanna Bambridge as my daughter’s teacher, but also as a fellow parishioner and parish council member at our Catholic church parish in Belgium, Our Lady of Mercy. Meetings were on Sunday nights, which all teachers know is the time when we wind down from the weekend and prep for the school week: lesson planning, grading papers, posting grades, emailing parents. But, Johanna was there for each and every meeting, prepared and ready to discuss parish business, plan events, and prepare for liturgical feasts. She was also there to represent the religious education program for the English-speaking families of the parish. Even though she was a wife and mother of two with a very full day-job, she was the Director of Religious Education and taught one of the classes herself every Sunday. It was hard to say no to her when she asked me to teach a class myself. After all, I was technically a stay-at-home mom for our two years in Belgium. Like the platoon leader who vows not to ask his soldiers to do anything he wouldn’t do himself, Johanna not only talked the talk, she walked the walk.

When I casually mentioned to her that I wished we would have shipped our piano to Belgium when we moved, she offered me her piano, free, “just pay to have it moved,” she said. It was an old upright with many years behind it, but after having it moved to our house and getting it tuned, it added much to making our assigned housing a real home during our time in Waterloo. 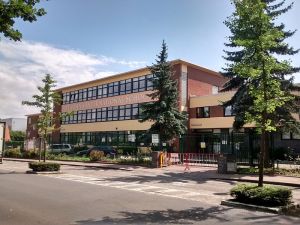 Shortly after her death on July 6th, a colleague from St. John’s International School created a tribute page on Facebook for Johanna. Each day I logged on to Facebook to read the condolences and remembrances left there by friends and former students from all over the world: Japan, Belgium (when we knew her), France (where she moved after Belgium). All, without exception, carried the same themes: selfless, caring, faith-filled, devoted to education, energetic. Many, many people said that their most vivid memory of Johanna was of her with her arms wrapped around children. She embraced everyone in her path.  She enveloped them with her warm smile and blazing, bright eyes. How many lives did she touch? How many children did she inspire? How many teachers, including myself, did she mentor and motivate? How many hearts did she open to her love of the Catholic church? 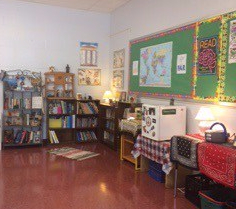 And, so, now at the beginning of this, my eleventh year in education, I re-dedicate myself to the values that Johanna so effortlessly lived and shared. I will greet each child with a warm smile. I will make learning fun. I will be compassionate and caring, even when I need to be firm. I will bring my faith and love of the Catholic church to every school day, to every lesson, to every encounter. I will do more, I will pray more, I will be more. 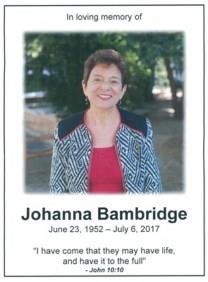 Johanna Bambridge will be greatly missed by all whose lives she affected, but she will not be forgotten. I know in my heart that she was welcomed with open arms to her final reward, where she heard, “Well done, good and faithful servant.” Rest in peace, Johanna. This year is for you.