Obsession: ob·ses·sion (əbˈseSHən) noun; plural noun: obsessions; (1) the state of being obsessed with someone or something. Ex: “she cared for him with a devotion bordering on obsession”; (2) an idea or thought that continually preoccupies or intrudes on a person’s mind. Ex: “he was in the grip of an obsession he was powerless to resist”. Synonyms: fixation, ruling/consuming passion, passion, mania, idée-fixe, compulsion, preoccupation, infatuation, addiction, fetish, craze, hobbyhorse.

I have a long history of becoming obsessed with a topic and holding onto it until I have sated my appetite by reading every single thing I can about it. This “condition” sometimes comes at the expense of attending a social obligation, having clean underwear, putting food in the refrigerator, taking even a modicum of exercise, and of course, engaging in real conversations with real people.

An analysis of my book bag after a trip to my public library would reflect one of two extremes: (1) 15-20 books, about half being non-fiction with each on a different topic or subject, and the other half being a mixture of classics, contemporary fiction, and young adult fiction; or (2) 15-20 books all on the exact same topic or subject. A quick glance at the bookshelves in several rooms of our house will also verify this.

When under the spell of one of my obsessions, it is all I want to talk about over dinner with my family, while in the car with one of my daughters, or while out with my husband walking the dog. It matters not at all that no one else in my family shares the obsession du jour or is in the least bit interested. Because they love me (or because I am very persuasive in wanting to talk about it), they listen and ask questions as though they cared. I love them for that.

While taking undergraduate and graduate courses to become certified to teach English (as my second career), I was taking an undergraduate class on world literature. My advisor for the certification program suggested I take it at my local community college, for convenience and cost savings. So, I was, by far, the oldest student in the room, and older than the professor as well. After reading a plethora of short stories and two novellas, all by foreign authors, we were given our final assignment: choose any international author and do a presentation on them. My husband strongly suggested I choose an author I was already covering in my middle school classroom to cut down on the research involved in the project. So, I did. I chose Sir Arthur Conan Doyle, the inventor of the great Sherlock Holmes. I was already quite familiar with Conan Doyle as a writer but I felt to do the project justice I should do a “bit” of research to round out his life story. Twelve books later I had my story: born in Edinburgh, went to medical school, worked as a ship’s doctor on a cargo ship, served as a medic during the Second Anglo Boer War, vehemently opposed to the atrocities committed by King Leopold in the Belgian Congo, became very interested in the occult and faeries, and yes, after being bored by his mediocre practice as an ophthalmologist, was the inventor of the great Sherlock Holmes. (My PowerPoint was well-received, and the afternoon tea of scones, cucumber sandwiches, and piping hot tea made to order in a college classroom didn’t hurt.)

When I first learned of the fate of the Romanov family, I spent months reading everything I could find at the public library. I was absolutely horrified at the thought of an entire family being executed en masse in 1918. The long-standing rumor that daughter Anastasia (Grand Duchess Anastasia Nikolaevna of Russia) had survived the brutal execution of the family kept the story alive for decades until finally, in 2007, her body was found and identified using DNA from England’s Prince Philip, who was a great-nephew of the last Tsarina. This did not stop me, however, from reading books written by the two famous Romanov imposters, Anna Anderson and Eugenia Smith, both of whom were confirmed to be unrelated to the Romanovs using the aforementioned DNA tests.

“The British royal family on the balcony of Buckingham Palace” by Carfax2 – Licensed under CC BY-SA 3.0 via Wikimedia Commons”

As for the British royal family, well, that obsession is long-standing and shows no sign of slackening. With Prince William and his wife, Catherine, Duchess of Cambridge, and their now two beautiful children, the monarchy, and my obsession, is safe and secure. Within the boundaries of my obsession with the British royal family lies a specialized “sub-obsession” with the Duke and Duchess of Windsor, the “love story” that nearly brought down the monarchy but in doing so paved the way for the current monarch, Elizabeth II. An earlier essay also documented this obsession, How We Changed the World.

Since obsessions for me frequently spin-off these sub-obsessions, the Romanovs also “hatched” a sub-obsession with Fabergé eggs, the beautiful and intricately decorated and bejeweled “eggs” the Russian Imperial Family gave and received as presents at Easter time. I’ve read extensively on the eggs, jewelry, and other priceless art pieces created by Pe

ter Carl Fabergé and his company. Only forty-eight eggs were made and of those forty-three remain. One year for my birthday I requested a jaunt to Richmond to visit the Virginia Museum of Fine Arts to see their collection of twelve. A documentary on the eggs and their creator, Faberge: A Life of Its Own, is currently touring movie theatres across the country, and I hope to have the opportunity to see that soon.

Along with millions of others, I am currently obsessed with Downton Abbey, the glorious creation of Julian Fellowes, whi 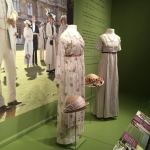 ch dramatizes the upstairs and downstairs of life on an exquisite country estate in England. The series, with its sixth and final season (insert quiet sobbing here), will air in the US this fall. Since I also have an obsession with the Victorian Era, which gave me reason to study British country homes and the lives of the nobility, I was enthralled with this costume drama from the first five minutes of the very first episode, where Lord Grantham learns of the sinking of the Titanic and the loss of the future heir to his estate. For Christmas this past year, I asked for a trip to Wilmington, Delaware, to see an exhibit of costumes from the television show. Thank goodness my husband is tolerant of these road trips to feed these obsessions.

Lest you think all of my obsessions emanate from across the pond, I have also been obsessed with the Kennedy family for most of my life. Aside from the political dynasty, there’s something about the highs and lows of that family, replete with its glorious successes and grave tragedies, which has always intrigued me. My collection of books about the Kennedy family takes up its very own shelf. I’ve traced Rose Fitzgerald Kennedy’s family history and that of the patriarch of the family, Joseph P. Kennedy, Sr. While President John F. Kennedy and his dazzling wife Jacqueline Bouvier Kennedy Onassis would garner enough material for a lifetime of reading, I’m equally as interested in JFK’s eight siblings. I’ve studied Rosemary Kennedy’s life story, including the tragic lobotomy which was supposed to have cured her of her mental disability when instead it institutionalized her for the remainder of her life. There’s the sad love story of Kathleen Kennedy Cavendish, widowed at the age of 28 when her husband, of the British nobility, died at the hands of a German sniper in 1944. She herself then perished in an airplane crash in France in 1948. With nine children and many, many grandchildren, the Kennedys have entered into many different arenas of public life. Their stories are fascinating to me.

In preparing for this essay I made a list of things that I have I’ve been obsessed with and read extensively on in search of knowledge and mastery of a subject: gardening; many, many different authors; cooking in general with jam-making being my current obsession; luxury yachts with Aristotle Onassis’s Christina O, in particular; tennis “grand slam” tournaments and some of that sport’s superstar players; Persian cats; famous gems and precious stones; royal families of Scandinavian countries, Japan, Saudi Arabia, and others; and many other things that I researched and devoured and moved on. I don’t necessarily have a shelf-full of books on all of these topics but I’ve read so much on them I am a dangerous opponent in several categories of the board game Trivial Pursuit. And don’t get me started on Jeopardy. That’s another essay entirely.